And weâ€™re backâ€¦after the longest intermission in American theatre history, taking a seat again at The Loft – the legendary home of The Human Race Theatre Company – feels like finally breathing again. I am hyper-aware of the sights, the smells, the comaraderie and the ambience we all once took so desperately for granted. May we never do that again. But for tonight, I find myself humbled by the mere presence of audiences and actors in the same room. 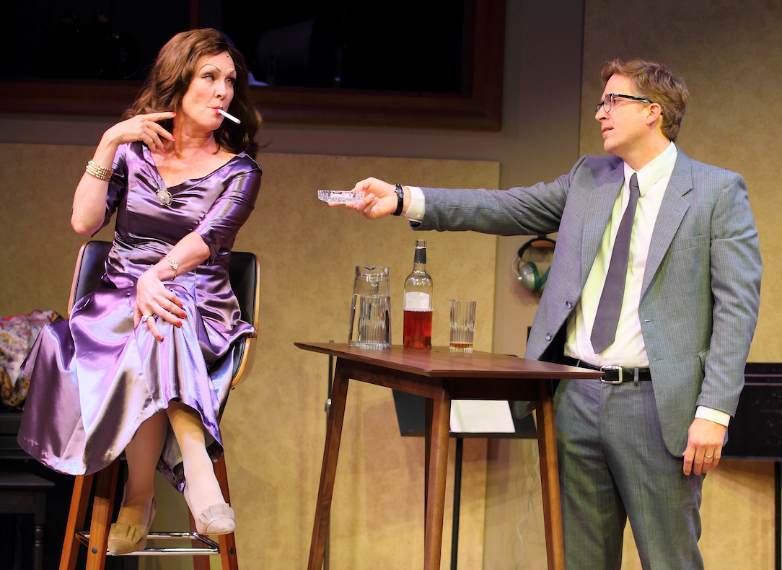 Something light was in order for sure and as always, The Human Race delivers in spades. No one has a real eagerness to emerge from a depression-fueled quarantine into a somber drama â€“ not yet, anyway; so to revisit this razor-sharp intimate comedy surrounding Hollywood lore ideally fits the bill. Looped is the first of two offerings from playwright Matthew Lombardo that will grace the Loft this season (His Whoâ€™s Holiday arrives just in time for the holiday season). This time around, we enter the world of an L.A. recording where legendary actress Tallulah Bankhead is called in to re-record one single line from her latest film Die Die My Darling. What should have been a fairly routine brief recording immediately becomes a rigorous, exhausting and liquor-soaked hilarious battle of wits. Inspired by a true rumor as it were, the story is the stuff of legend â€“ and Lombardoâ€™s script takes every advantage to keep the comedy coming line after precious line. Not a single word is wasted.

It must be said that Marcy McGuigan is revelatory in the role of Tallulah Bankhead (originated and perhaps even written for Tony-nominee and TV icon Valerie Harper). Under the ever-watchful direction of Producing Artistic Director Kevin Moore (now in his final season with the company), the show crackles in every moment with wit and charm in ways that comedies rarely do anymore. The piece harkens back to the stylistic approach and sparse word conservation of Neil Simon while all the while feeling like Simon was a launching pad rather than a direct copy; Lombardoâ€™s voice is wholly his own here. McGuigan and Jaryl Draper, brilliant as Bankheadâ€™s frazzled editor, are a comedic pair for the ages. Her â€“ landing the jokes â€“ and him – setting her up. And just when you think you have the play figured out, the air gets heavier as we watch in real time â€“ a woman at the end of her career and the man (with his own demons) who must coax one final performance from her. Mooreâ€™s staging even feels like a boxing match at times â€“ the tight quarters of the studio adding to the tension. Resident Artist Scott Stoney rounds out the cast as studio engineer Steve â€“ caught in the crossfire of the chaos.

Late in the second act, Lombardo gives us a glimpse of the actress Bankhead once was or at least could have been when Tallulah delivers an impassioned monologue from A Streetcar Named Desire. In that moment, the jokes and quips are gone, the frustrated rage is cooled, and we are left with an actress delivering the performance of her career â€“ for a private audience of one. A less seasoned actress might have thrown this moment away or gone full â€˜Norma Desmondâ€™, but instead the remarkable McGuigan gives us an honest moment of clarity instead of celebrity. Those few minutes alone are worth the price of admission.

Tickets and performance information for â€œLoopedâ€ are available at www.humanracetheatre.org or by calling Ticket Center Stage at (937) 228-3630. Performances continue through August 22. (Please refer to the Health and Safety policies before attending available on the website)

DAVID BRUSH is a director, music director, vocal coach and librettist/lyricist. He received his M.A. in Theatre from Regent University and has assisted in the development of over 15 original musicals – two of which had successful Off-Broadway runs. David is a member of the Dramatists Guild, the host of musical theatre podcast The 10glo Show, teaches musical theatre voice and serves as adjunct faculty for several universities.

A new Calendar for everything onstage from LCT's member theatres.